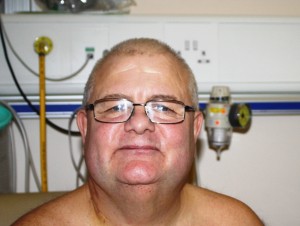 A grandfather of 13 has heaped praise on cardiac experts from Blackpool after undergoing a state of the art operation.

Rod Woods, 59, from Lowerhouse, underwent a new procedure at the Lancashire Cardiac Centre based at Blackpool Victoria Hospital.

The Cardiac Centre is the only one in the north of England offering the pioneering new surgery, called right anterior thoracotomy, and he is delighted with the results.

The married father-of-four said: “I was walking in Tenerife last year and getting out of breathe and getting some acid reflux at the same time.

“I went to see my doctor and he said I needed a new valve in my heart which came as a bit of a shock I have to admit.

“I was a bit nervous but my surgeon, Mr Zacharias, told me all about the operation and really did put me at ease.

“From there everything went superbly well and I can’t praise the staff enough. From the cleaner to Mr Zacharias I could not have wished for better care and I’m thinking of coming here to two weeks holiday this year instead of Tenerife because they looked after me so well.’’

One of the benefits of the minimally invasive operation is that it means the patient can return to a normal life within a few weeks while benefiting from reduced scarring.

Mr Woods said: “I felt a bit uncomfortable for a couple of days but it was a six hour operation so I knew I would feel something.

“But I soon felt great and I couldn’t believe how quick I was up and about. I can’t believe how small the scar will be as well. Once the hair grows back on my chest I don’t think anyone will know I’ve had it done. It’s amazing.’’

Mr Joe Zacharias, Consultant Cardiothoracic Surgeon, said: “We are delighted that Mr Woods is recovering so well and so quickly.

“The least invasive way to replace an aortic valve is through this new technique known as the anterior right thoracotomy (ART), which is performed through a six centimetre opening next to the breast bone.

“In the past, the only way to replace the aortic valve was by cutting the breastbone down the middle to gain access to the heart, an invasive procedure which weakens the chest, and it has a long recovery time of up to three months.

“This new procedure has many benefits for patients. It reduces trauma compared with splitting open the breastbone, so patients recover more quickly. With the conventional method they are in hospital for about six to seven days but with keyhole, it is less.

“Being keyhole surgery, it is technically more demanding and can take half an hour longer than traditional open-heart surgery because it requires more intense concentration.

“However, the keyhole procedure has a lower risk of blood loss and infection because you don’t open the breast bone up. There is a small chance that during the operation it may be deemed too challenging because of other problems. Then, surgeons would need to revert to opening the breastbone to complete the surgery, but this can be done rapidly without additional risks.’’

He added: “We are very proud to say that the Lancashire Cardiac Centre is the only place in the north of England to provide this operation.

“The centre is recognised as one of the most innovative in the country and this type of pioneering operation from its dedicated staff can only help to enhance that reputation.

“We have previously introduced endoscopic vein harvesting to reduce trauma to the leg during coronary artery bypass grafting. We have the largest experience with minimally invasive Mitral valve surgery in the UK and have trained teams from all over Europe to get started.

“We recently were the first team to try out 3 D technology to improve the safety of “Key-Hole cardiac surgery” and this is now also regarded as standard of care. ’’