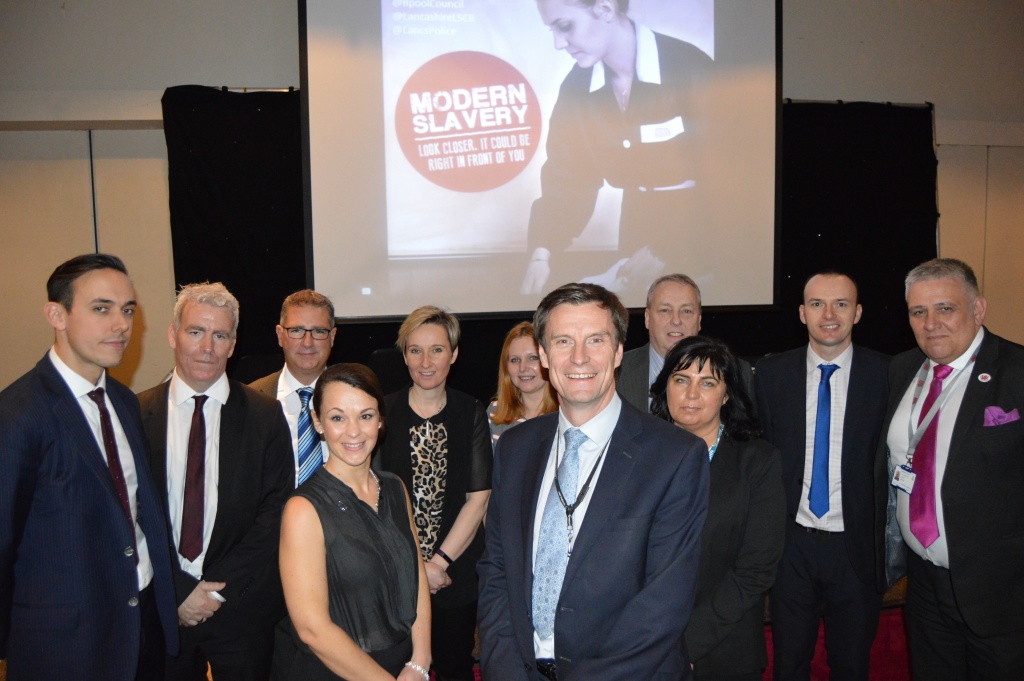 Danielle Hague (fourth from left), Superintendent Andy Murphy from Lancashire Police (centre) and Hazel Gregory (third from right), with delegates and speakers at the modern slavery conference at the Village Hotel in Blackpool

Horrific abuse uncovered by ‘modern slavery’ experts was highlighted at a national conference in Blackpool.

One of the many vulnerable victims of this cruel and calculated crime was described as resembling a concentration camp victim due to the years of physical, mental, emotional and sexual abuse he had suffered.

His case was typical as he didn’t have the capacity to understand that he was being treated as a slave and he was being controlled through threats of violence, coercion and physical attacks.

The theme of the event was ‘See It, Share It’ as everyone, including professionals and the public, can help to detect and halt this insidious form of abuse.

Hazel Gregory, Head of Safeguarding for Blackpool Teaching Hospitals, said the conference was a great success in raising awareness across professional groups.

She said: “No one organisation can tackle this form of abuse alone; partnership working is the key.

“The main message from the conference was, ‘if something doesn’t seem right, it probably isn’t’. If you have any suspicions, please inform the relevant people – see it and share it.

“In some cases of this organised crime and vile abuse, we only have one chance.”

The Home Office estimates that there are at least 13,000 victims of modern slavery in the UK from more than 70 different nationalities and British citizens are particularly vulnerable.

Modern slavery involves the recruitment and movement of individuals using threats, deception and coercion for the purpose of exploitation. It takes many forms but the most common are sexual exploitation, forced labour and domestic servitude.

Victims are forced to work against their will in many different settings, including brothels, cannabis farms, nail bars, car washes and in agriculture. They can also be forced to work in people’s homes. 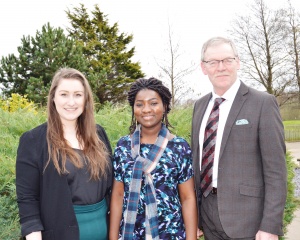 Representatives from the Children’s Trafficking Advice Centre (CTAC) in London

He said: “Within Lancashire we are aware that people are exploited for modern slavery and an example of this was when 23 Chinese cockle pickers drowned at Morecambe Bay.

“In our area we have additional vulnerabilities due to our tourist and agriculture trades, cheap business and housing rents.

“Modern slavery can have devastating impacts on the lives of victims, who are often ‘hidden’ in plain sight. It is important for members of the public to look closer because often the warning signs are right in front of us.

“We all need to consider when we are paying for a service why it is so cheap and could those people who, for example, are cleaning your car, working in a nail bar, cleaning a hotel, be victims of exploitation.”

Danielle Hague, Child Sexual Exploitation (CSE) and Human Trafficking Analyst and Practitioner for the Trust, said: “The conference was attended by more than 300 professionals, with 100 from the health sector including A&E, sexual health and midwifery.

“All who attended now have increased awareness of what to look for. Now professionals will be aware that no matter how minor the concern, or just the feeling something isn’t right, that they do need to do something about it as it can be the one chance to protect in some of these cases. This was reflected in the presentations throughout the day.” 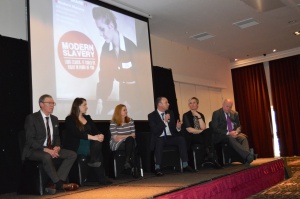 The panel at the conference

Speakers included representatives from the Children’s Trafficking Advice Centre (CTAC) run by the National Society for the Prevention of Cruelty to Children (NSPCC).

Kip Gibbens, a National Crime Agency senior officer based in London; Charlotte Jamieson, a social worker and Linda Robert, a representative from CTAC’s Young People’s Group presented an overview of the international and national picture in relation to child trafficking. Guidance was offered in relation to agency responsibilities and multi-agency working.

Kip said: “It was good to see so many people at the conference – it has put modern slavery on the map.

“More and more people are beginning to understand what modern slavery is and that it needs a multi-agency approach.”

Linda added: “It is often a hidden crime and often takes place where there is a transient population, cheap housing, vulnerable people and a lot of poverty.”

They said criminal gangs involved in modern slavery often target people in seaside towns such as Blackpool where deprivation and social problems are rife.

Helen Gordos, a Tactical Advisor from the Modern Slavery Trafficking Unit at the National Crime Agency presented an overview of the prevalence and complexities of modern day slavery and human trafficking from both a national and international perspective. 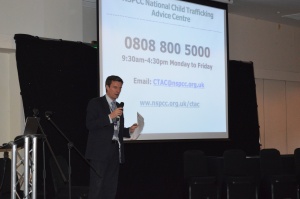 Kevin Hyland, the Government’s Independent Anti-Slavery Commissioner, also spoke at the event. Kevin was appointed in 2014 to spearhead the Government’s response to modern day slavery. Formerly the head of the Metropolitan Police’s world renowned Human Trafficking Unit with more than 30 years’ experience investigating organised crime, he spoke about his work with slavery victims and how he secured a number of key prosecutions of perpetrators.

Detective Superintendent Tim Champion and Detective Inspector Rick Stewart from Trident and Area Crime Command from the Metropolitan Police, gave an overview on gangs/vulnerability and how they look to target offenders under modern slavery legislation.

Detective Inspector Lyndon.J.Hawker, from Newport Police’s Intelligence Unit in Wales presented a review of modern slavery ‘Operation Imperial’ when people who were homeless were exploited for forced labour.

Danielle added: “Modern slavery is serious and organised crime. Individuals who are currently residing across the UK, including Lancashire, are being exploited for the gain of others, in a variety of forms including sexual exploitation, domestic servitude and forced labour.

“We will continue to raise awareness across our workforce and among members of the public.

“We will further develop procedures, access existing forums and training days to customise training for specific areas, continue to work in partnership and develop our role as part of the Pan-Lancashire Working Group and try to identify further funding opportunities to continue this vital work to help protect victims.”

If you suspect that someone is being exploited, call Crimestoppers in confidence on 0800 555 111 and if you think they are in immediate danger call 999 or go to www.lancashire.police.uk/modernslavery

If you are a victim or you have been affected by modern slavery, you can also seek help from Lancashire Victim Services on 0300 323 0085 or visit www.lancashirevictimservices.org #SeeItShareIt 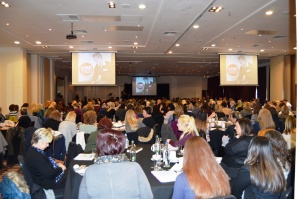