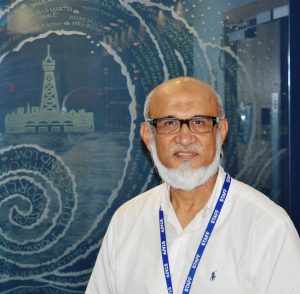 A well respected hospital consultant who is set to retire, has won the title of Doctor of the Year in The Gazette’s Best of Health Awards 2016.

Doctor Shabbir Susnerwala said winning the newspaper’s award was the “icing on the cake” after 20 happy and productive years as a leading consultant oncologist at Blackpool Victoria Hospital.

Dr Susnerwala, who works in the Macmillan Unit and was nominated by a grateful patient, was given the award at a ceremony at The Imperial hotel in Blackpool on Thursday, September 29. He is due to retire on October 28.

He said: “It’s good to receive the award and to retire on a high note!

“It has been great working here in Blackpool. The staff are great – they are lovely. The environment is very good. The facilities here have developed significantly over the years.”

Dr Susnerwala was nominated by Betty Crichton from Blackpool who described him as “a wonderful and caring doctor” and “a man of compassion”.

Betty, a former Mayor of Blackpool who was treated for bone and liver cancer by Dr Susnerwala, said: “He is greatly loved and appreciated by all his patients.

“In essence, his is a giant in his professional medical career and a great ambassador in extending the lives of so many patients. 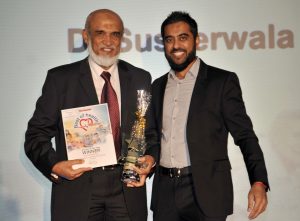 “He has a great sense of humour – a vital commodity in the work that he does. He puts his patients at ease with his quiet demeanour, his humbleness and attractive personality and I believe it is his beautiful culture that has made him the person he is. He is an inspiration to all who walk his path.”

Dr Susnerwala moved to the UK from India in 1989 to take on a post as a junior doctor. He was appointed as a consultant at Blackpool Victoria Hospital in 1996 and held his first clinic in January 1997.

His first job in the UK was with the Christie Hospital in Manchester and when he moved to Blackpool he made it his mission to improve services for people on the Fylde coast.

He set up the Trust’s first solid chemotherapy service for patients with breast and bowel cancer in 1997.

He explained: “In the first year I thought if we could develop chemotherapy services for people, it would mean they didn’t have to travel to Preston or Manchester.

“This is one of the things I am most proud of in my career.”

For many years Dr Susnerwala treated all cancers and more recently he has been working with urology, colorectal and breast cancer patients.

In his retirement Dr Susnerwala plans to do as much travelling as possible.

He added: “I am indebted to all of the medics and other members of staff I have worked with over the years.

“My secretary, Sue Biddlestone, has been my anchor over the last 20 years. Sue is very helpful. It is so important for consultants to have medical secretaries. 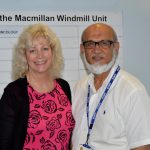 “I have thoroughly enjoyed working with everyone from surgery, medicine, pathology, radiology and other departments.”

Sue added: “We are all going to miss him. He has a great sense of humour and he is a lovely person.”