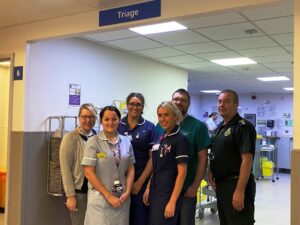 Blackpool Teaching Hospitals NHS Foundation Trust has reduced its ambulance handover times thanks to a special collaboration and a change in practices.

‘Every Minute Matters’ is a collaboration between the North West Ambulance Service (NWAS) between fourteen North West emergency departments, and Blackpool Victoria Hospital is now in the top three in the North West for reducing this time to free the ambulance for the next emergency, reduce patient waiting times and significantly reducing the delays experienced by patients brought in by ambulance.

Despite being the second busiest Emergency Department (ED) in the North West, for ambulances, Blackpool has performed higher than the regional average in January for ambulance turn around,  an average of 28 minutes, the regional average was 34 minutes. NWAS deflection rates (where patients are treated in the community instead of coming to hospital) meant that 27.3% or 1109 patients were treated elsewhere other than the ED.

Figures for the first three weeks in February, show that Blackpool were the second, third and fourth busiest departments in the collaborative, but managed to achieve first, second and third fastest turnaround times. In all three weeks the NWAS deflection rate for the catchment area was greater than the regional average

Blackpool Victoria Emergency Department Consultant, Dr Sam Guest, said: “We have changed our processes here at the front end of the department by working better together. 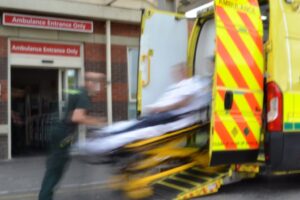 “Ambulance handovers are the time it takes to ‘triage’ a patient where ambulance staff provide critical patient information to hospital staff, the physical transfer of the patient to hospital equipment.

“We have split the ambulance triage and walk in triage into two separate areas, each with its own streaming nurse, with the Triage teams consisting of an ED consultant, senior ED nurse, a triage nurse and a Healthcare Assistant.

“The ambulance crews now have a completed form about the patient on arrival which saves time. Through this new system, we are managing surges better and are consistently faster despite spikes in attendances.”

Ian Baines is a Hospital Ambulance Liaison Officer based in Blackpool’s ED. He said: “The collaborative has really made a difference to the turnaround time which makes the whole system safer and more comfortable for the patients.

“It also helps that the ED team here are brilliant – so friendly and happy – and that makes all the difference.”

The results are so impressive that a number of other Trusts have visited to see the new processes working.

Blackpool Teaching Hospitals NHS Foundation Trust Assistant Directorate Manager, in Emergency and Acute Medicine, Tracey Dougall, said: Our Directorate Manager Helen and I are really pleased with the results from this collaborative work.

“It really has enhanced the patient experience in the Emergency Department and we are really proud of the team.”