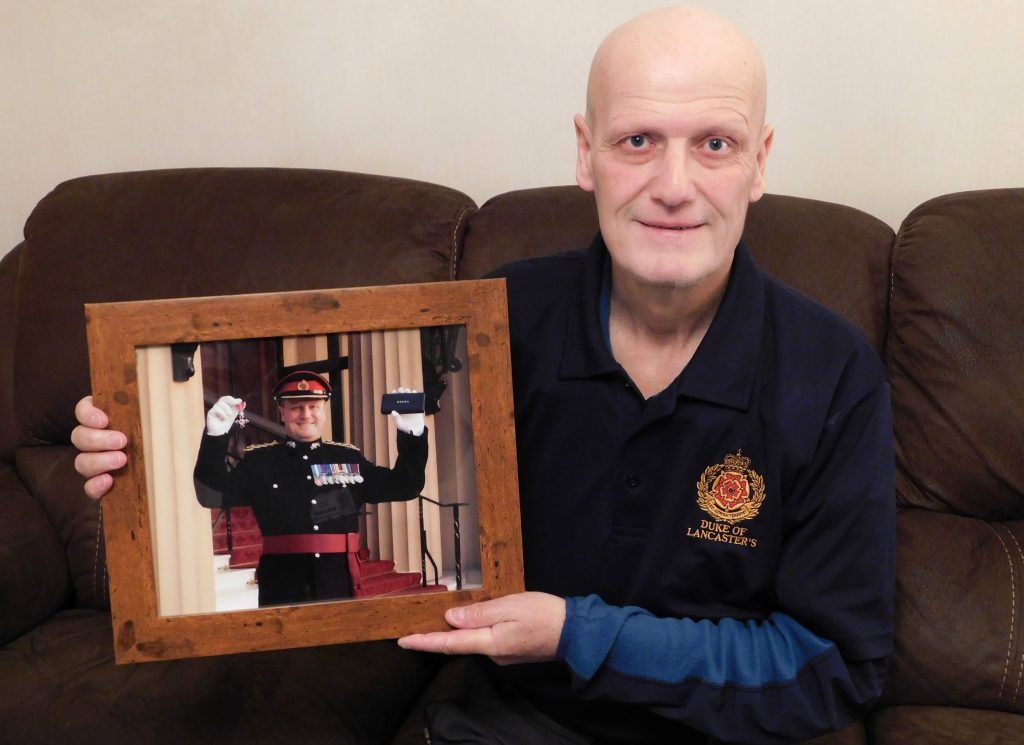 A serving Major in the Duke of Lancaster Regiment whose life was turned upside down by a cancer diagnosis is now looking forward to the future thanks to the care provided at Blackpool Victoria Hospital.

Major George Henry Briscoe, MBE, who has been in the army for 36 years was diagnosed with advanced stomach cancer in 2017 with health workers unsure if treatment would be successful.

The 54-year-old, who admitted that he was left planning his own funeral, said: “In October 2017 I had stomach indigestion and was given antibiotics to clear up the infection but only a few months later I had to go and see my GP as my symptoms had gone worse.

“I was told at this point I had contracted Helicobacter pylori (H.pylori) in the stomach, a bacterial infection caused through living in dirty and unhygienic conditions which is reflective of my time working in Afghanistan.

“In February I had an endoscopy and six biopsies and was told I would be due to have some more tests a few weeks later.

“I was reassured not to worry but after my biopsy results I received an urgent phone call from Dr Issacs from the Cancer team at Blackpool Victoria Hospital and I was told to come to hospital immediately.

“I knew something was wrong and to my horror it was explained that I had stomach cancer in the advanced stages and a large tumour which could reach other organs.”

The staff at Blackpool were not sure if the tumour was treatable and this would be determined through a treatment plan.

George added: “The likelihood of the chemotherapy working was 57 percent, so at this point I made a will and started planning my funeral as I believed I would die.

“I lost six stone and went from being a fit, healthy solider to feeling exhausted and the side effects from the chemotherapy were really tough to deal with too.

“After my chemotherapy I was admitted to hospital with sepsis, Colitis and Clostridium difficile (C. diff) and I was very poorly.

“I was convinced I wouldn’t make it because of how weak I was, but I was strong and pulled through to being discharged.

“In August I had a stomach removal and this involved rehabilitation to get me back on my feet after the intensive treatment.

“In December I had one final CT scan to check the update on the tumour and I had a long four week wait until Dr Bezecny delivered the good news that I had the all clear!

“I’ve come such a long way from how things looked at the start and this is all down to the NHS and the fantastic care at Blackpool Victoria Hospital.

“All the staff were so positive and did their very best to help me on my journey. I met some really humble people.

“There is hope out there for people who are going through what I have and I would advise everyone to be positive and to follow the advice and the treatment plan of the specialists.”