You are here: Home > About Our Trust > Performance > Safety

To achieve a culture of zero tolerance towards avoidable patient harms.

Patient safety is a key priority for the Trust. We are proud to have won several national awards for the innovative work we have undertaken to improve patient safety. We continue to build on this foundation as a priority to support a reduction in avoidable patient harms.

Patient falls are the most common patient safety incident reported to the National Patient Safety Agency (NPSA). In an average 800-bed acute trust there will be around 24 falls every week – over 1,260 a year. Associated healthcare costs are estimated at a minimum of £92,000 per year for the average acute trust (Healy and Scobie, 2007).

Patient falls is used as a key performance indicator to show the quality and safety of care given to patients while in hospital. Data for patient falls is presented below: 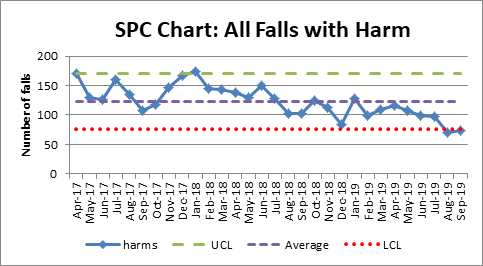 Patient falls are one of the most common patient safety incidents reported.  The majority of slips, trips and falls result in low or no harm to patients physically. However, any slip, trip or fall can result in the patient losing their confidence.  There have been a number of initiatives introduced throughout the Trust.

The number of patient harms as a result of a pressure ulcer is used as a key performance indicator to show the quality and safety of care given to patients while in hospital. Data for pressure ulcers is presented below: 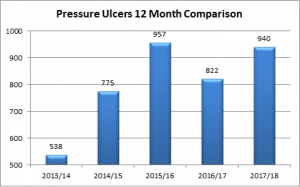 There have been a number of initiatives to reduce patient harm as a result of a pressure ulcer introduced throughout the Trust. 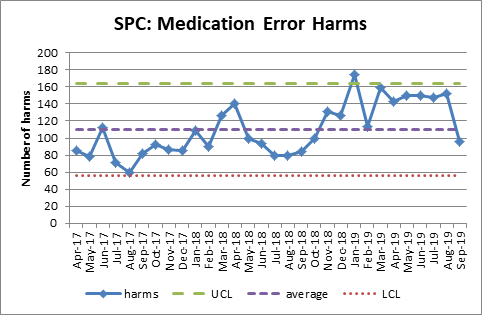 It is vital that everyone working in clinical areas are made aware of any errors or incidents that have occurred so that lessons can be learned where necessary, and practice changed. There is a lot of training taking place within the Trust relating to administration of medicines, and most areas now ensure the Nurse who is administering medications wears a tabard to ensure minimal interruptions take place. The reporting of any medication errors is actively encouraged by the Trust.

Measures have been put into place as outlined below and it is anticipated that the Trust will continue to see a downward trend for medication errors.

Building on work already commenced, there have been a number of initiatives introduced to promote the reduction in medication errors resulting in patient harm:

Tackling health care-associated infections, such as MRSA, continues to be a key patient safety issue and is a priority for the NHS, as set out in the 2009/10 NHS Operating Framework and the 2007 Public Service Agreement ‘Ensure better care for all’.

MRSA bloodstream infections (bacteraemia) are a significant cause of morbidity and can be difficult to treat because of the multiple antibiotic resistances. Infections lengthen hospital stay and increase morbidity and in some cases, result in death. Reducing the incidence of infection will therefore have significant patient benefits. The aim is that action on MRSA will also help to reduce the incidence of other similar infection, through the implementation of improved infection prevention measures. Data for MRSA infections are detailed below: 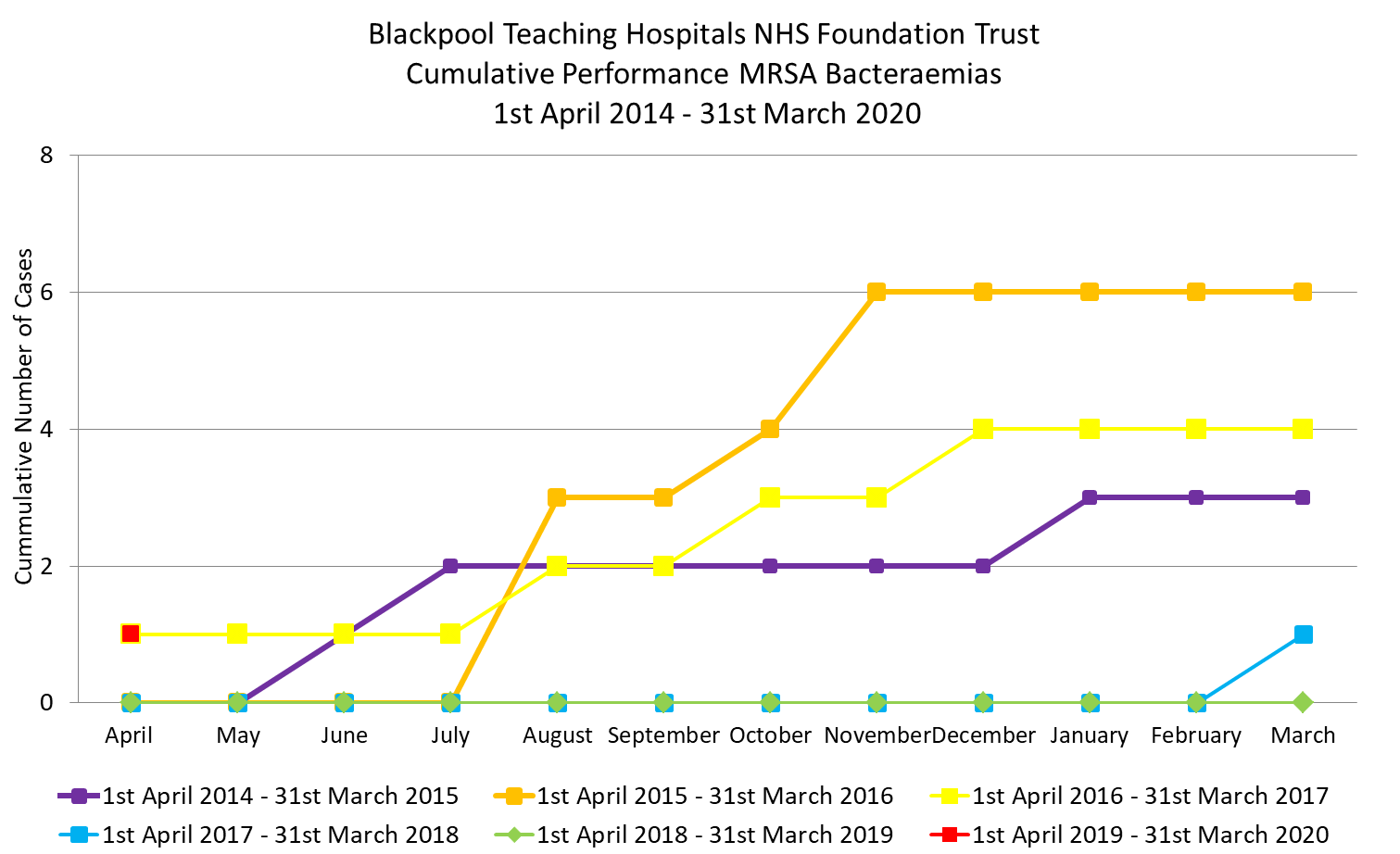 A number of measures have been embedded within the organisation to prevent further cases of bacteraemia and these continue to be re-enforced. All cases of MRSA Bacteraemia are investigated through a post infection review (PIR) process, the findings of which are communicated across the Trust. We conduct Aseptic Non-touch technique (ANTT) competency training throughout the year for all staff and ensure that practice is audited annually. Saving Lives quarterly audits continue to monitor compliance and ensure practice is improved. All high risk patients admitted to the Trust are screened for MRSA as per the latest Department of Health guidance. Hand Hygiene compliance is monitored quarterly through covert hand hygiene audits and results are presented to the Divisions and monitored through the Whole Health Infection Prevention Committee.

The chart below shows comparative MRSA data for financial years (April to March) 2014/15 to 2019/20.  There has been 1 recorded case in the Trust up to the end of April 2019 for this financial year.

Tackling health care-associated infections, such as Clostridium difficile continues to be a key patient safety issue and is a priority for the NHS as set out in the 2009/10 NHS Operating Framework and the 2007 Public Service Agreement ‘Ensure better care for all’.

Mandatory surveillance for Clostridium difficile was introduced in England in January 2004 with all acute and specialist NHS trusts in England required to report all diarrhoeal samples (defined as those that take the shape of the container) from people 65 years of age or older who have not been diagnosed with Clostridium difficile infection during the preceding four weeks. Trusts are required to report all positive results, including those received from people in the community. Since 1 April 2007, trusts were required to expand this reporting to include all positive results in patients aged two years and over. Data for Clostridium difficile infections are presented below: 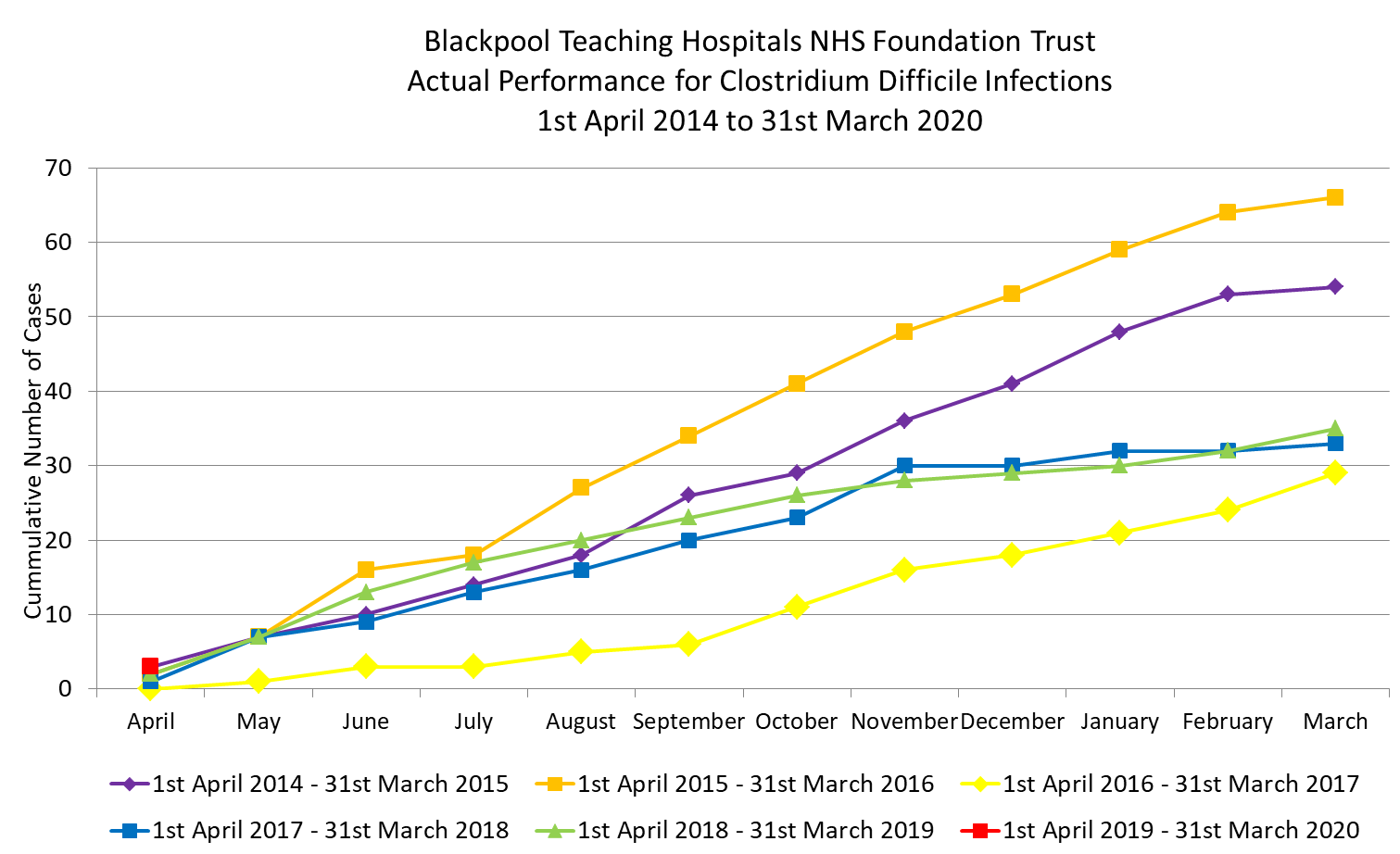 The chart below shows comparative Clostridium difficile data for financial years (April to March) 2014/15 to 2019/20.  There have been 3 recorded cases attributed to the Trust up to the end of April 2019 for this financial year.

Staphylococcus aureus is a bacterium that lives on the skin of approximately a third of the population. When it remains on the skin it is quite harmless, however once in the bloodstream it can cause a serious infection. Although the bacteria, is sensitive to antibiotics the infection can lengthen hospital stay. The aim is to reduce the number of incidences of MSSA blood stream infections and thereby protect patients. 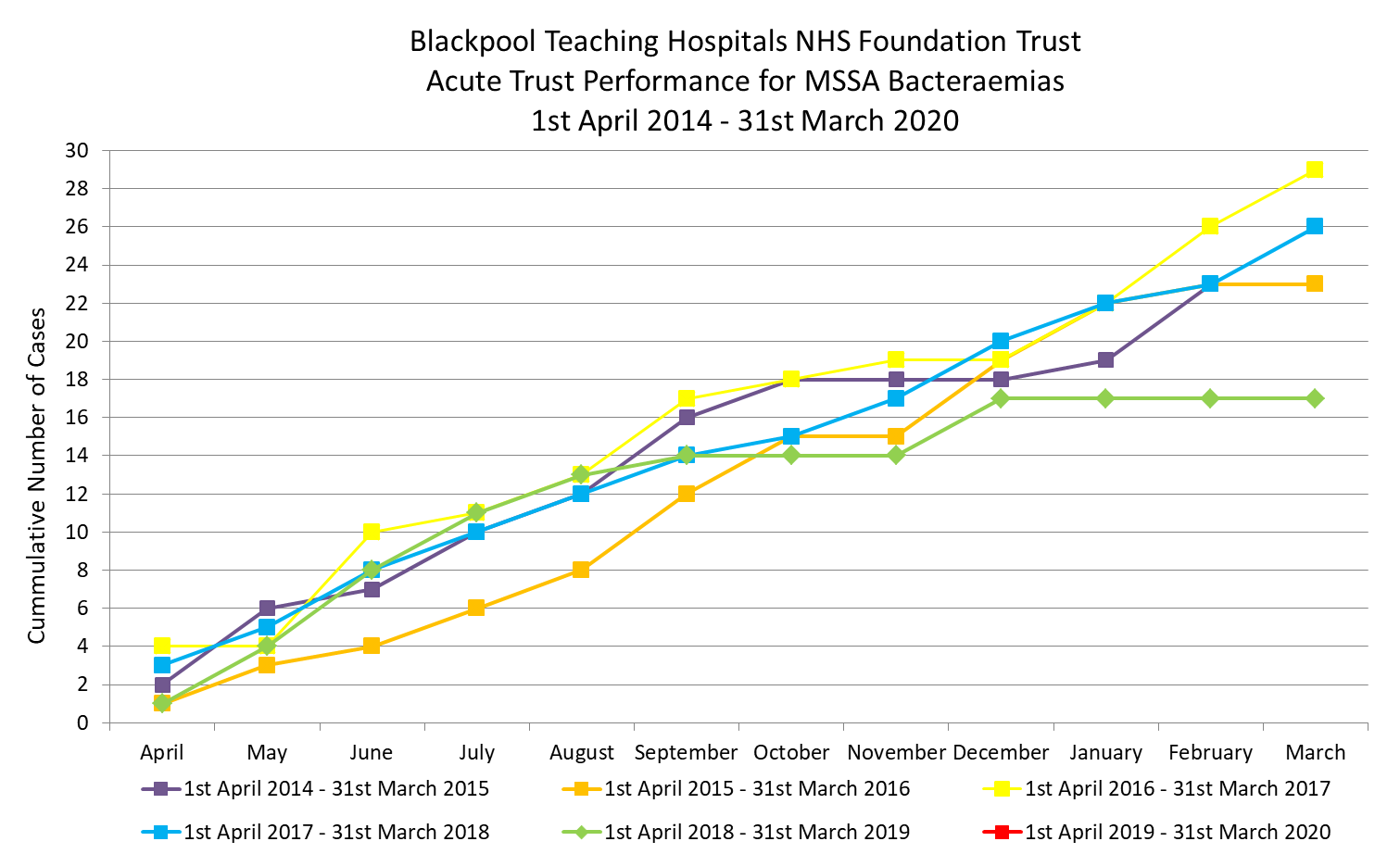 The chart below shows comparative MSSA data for financial years (April to March) 2014/15 to 2019/20.  There have been no recorded cases in the Trust up to the end of April 2019 for this financial year.

E. coli forms part of the normal bowel flora in humans, however, some strains have the ability to cause infections. These infections include food poisoning, or infections outside the intestinal tract such as urinary tract infections (UTIs) and bacteraemia. 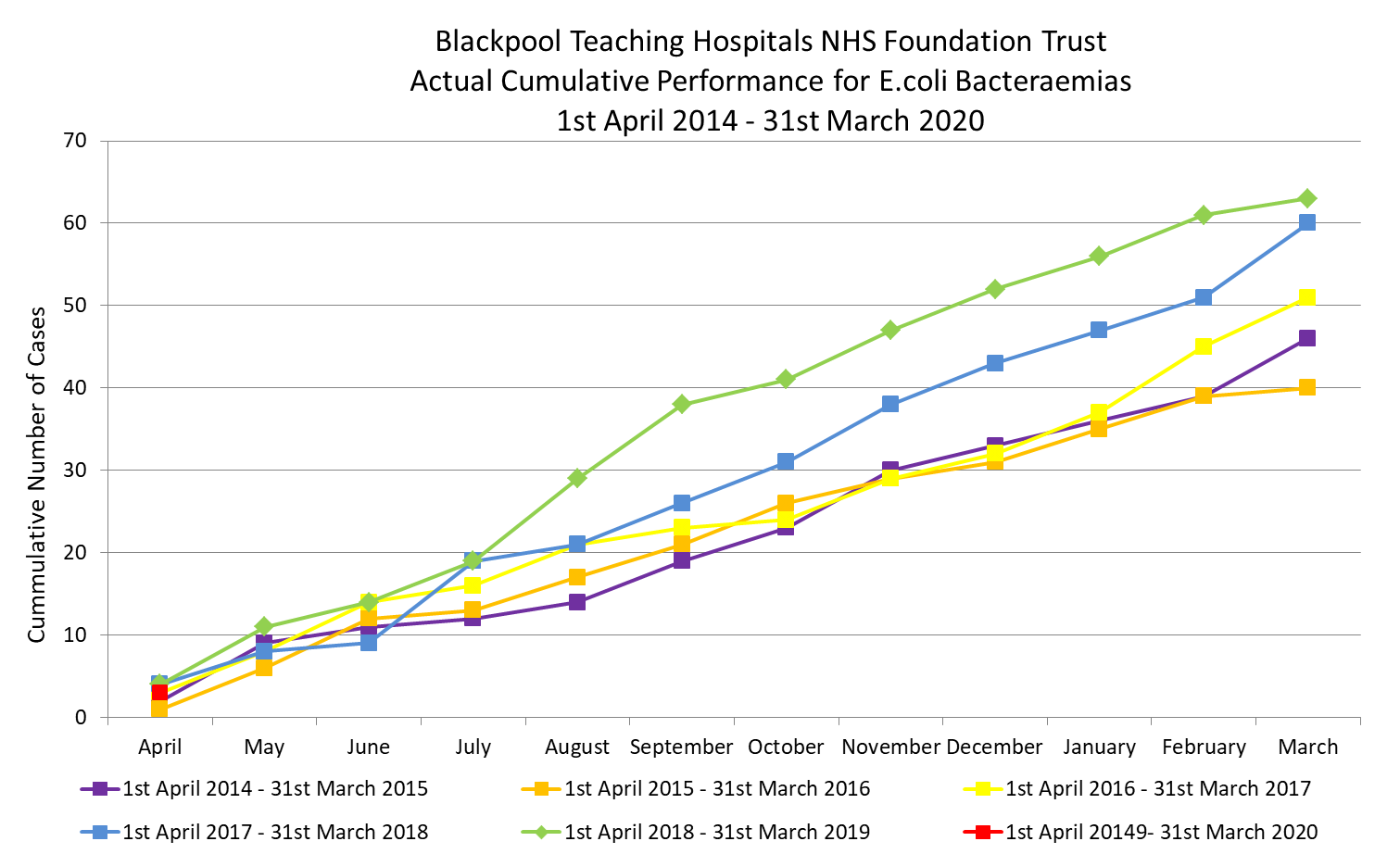 The Department of Health directed that from June 1st 2011 all Trusts must report E. coli blood stream infections on the Healthcare Associated Infections Database.

In March 2017 the Secretary of State for Health launched an important ambition to reduce Gram-negative BSI’s by 50% by 2021. This reduction was based on data from January to December 2016. This ambition has been reviewed and the reduction is now to be achieved by 2024.

The chart below shows comparative E.coli data for financial years (April to March) 2014/15 to 2019/20.  There have been 2 recorded cases in the Trust up to the end of April 2019 for this financial year.